It’s inevitable in our society that we in the long underwear set are compared to the police. We’re seen as performing essentially the same job. It’s a natural comparison to make, but the common ground pretty much ends there.

As I’ve chronicled in my books, I grew up in a small town with a very low crime rate and a suitably small police force. The police officers there are our neighbors and friends. Our kids go to school with their kids. We see them at the supermarket, at church, at the car wash. We know them and, because of that, we trust them.

In larger areas, though, the police are usually strangers to us. They live in a different town or a different part of the city. Of course, in a large city, they could be your next-door neighbor and you still might not know them.

This sort of “stranger effect” is, in my opinion, a large factor in the growing distrust that the public has for the police. (Of course, the fact that our communities are too large is problematic on many levels, not just this one.)

We costumed folks are usually in that category, too. Many of us keep our identities secret, so the good neighbor aspect will never be there. And even those, like myself, who have public identities aren’t well-known except by our nearby neighbors. Because most of us do live in urban areas.

But there are some bigger differences between metas and police. One of them is that the police in urban areas are becoming increasingly militarized. They’re being trained like soldiers, with more lethal weaponry, and a mindset more like a soldier than a peace officer. Sure, many metas are powerful enough to be in combat, and some often are. But the difference is that that’s not our mentality.

Another difference is the fact that police communities generally maintain an “us and them” attitude, which only adds to this problem. It causes police to be suspicious of pretty much everyone, and to assume the worst more often than they should. This ends tragically in many cases, as evidenced by the rash of confrontations in which the police quite clearly used excessive – often fatal – force when utterly unnecessary. 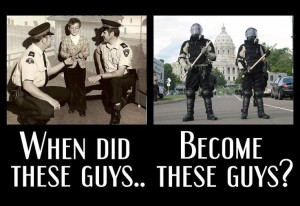 Before or after the day the music died?

What appears to be lacking, in my view, is sufficient training in assessing threats. So we end up with police shooting children holding toy guns, shooting unarmed motorists still sitting in their cars, or attacking because the officers thought the suspect had a gun (but didn’t actually see one). And in too many cases, clear cases of excessive force do not result in any indictments against the guilty officers. The only thing that has started to change that is citizens with camera phones and the use of body cameras on the police.

We metas are generally better trained to assess actual threats than the average police officer, which is perhaps because many of us have abilities that are potentially more deadly than a police officer’s gun. Of course, it’s also true that many of us are in much less danger from such threats than police officers, so we can afford to be less hasty.

But it’s also true that we’re held to a different standard. If a meta takes down a person because of mistaking a cell phone for a gun, the excuse of “thinking” they had a gun will not hold. Such mistakes shouldn’t happen, we’re told, because of how dangerous we are. I think this is a good thing. We are dangerous. We do need to be careful. But police are dangerous too, quite obviously.

As fans of that guy in the red and blue suit know, with great power comes great responsibility. This is common knowledge to the vast majority of metahumans. But it seems the message needs to be painted on the walls of many police departments.