Going into this business, I was always aware that I would undoubtedly get injured on the job. Probably severely, at some point. And maybe fatally, one day.

Fortunately for me, I have a pretty good defense mechanism. The massive amounts of energy I produce form a sort of “force field” in and around my body. It’s always “on,” so to speak, unless I’m asleep or otherwise unconscious. And if I’m dangerously low on energy, such as after a prolonged battle, my shields are proportionately weakened. It was in one such state that I found myself experiencing something I never imagined.

Those of us in this business always expect certain types of injuries. We’re shot at practically every day. Knives are pretty popular, too. And of course, there are always the explosions, fire attacks, and so on.

One thing I personally never expected was to be impaled by a spear.

If you’ve read Reckoning, you know the circumstances around this episode. As I said, I was pretty weak, and I never saw the attack coming. I just felt something hit me in the back. It didn’t even especially hurt, just felt like a bump. But then, that’s shock for you.

At the moment it happened, I was hovering above the “bad guys,” looking down at them, and suddenly something was obstructing my view of them. It was, of course, the blood-stained spear, jutting through my body under the right side of my ribcage.

At the time, it was one of the more surreal experiences of my life, but again, I attribute that mostly to being in shock. It didn’t really register for a minute that I’d been stuck through. I mean, a spear? For real? 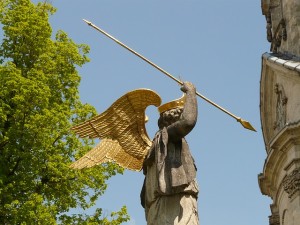 Hey, you know what you’re not supposed to do when you’ve been impaled? Pull it out, that’s what. Doctors get pretty upset when you do that. Assuming you don’t bleed out before you get to a hospital, that is.

I didn’t have much choice, though. I still had a battle to win, and that’s a bit hard to do with a six-foot metal rod sticking through your guts. I have only vague memories of pulling the thing through me. I do remember it made a pretty gross sound, though.

Ever play with this stuff? 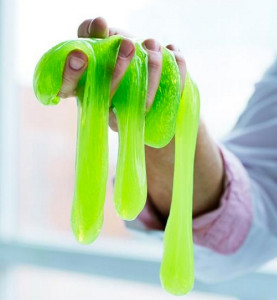 No, not troll bogeys.

You know that noise it makes when you plunge a finger into it? Kinda like a wet fart? Yeah. That’s what pulling out the spear sounded like.

Later, at the hospital, the doctor did lecture me, while simultaneously remarking that it was amazing that I hadn’t died and that there wasn’t as much internal damage as he’d expected. That’s when I started to figure out that my body’s force field defenses weren’t just external.

Still, the next time someone impales me, I hope they at least have the decency to drop me into a big ol’ martini.

The bigger confrontation is the one an individual has with itself.~Asghar FarhadiTweet