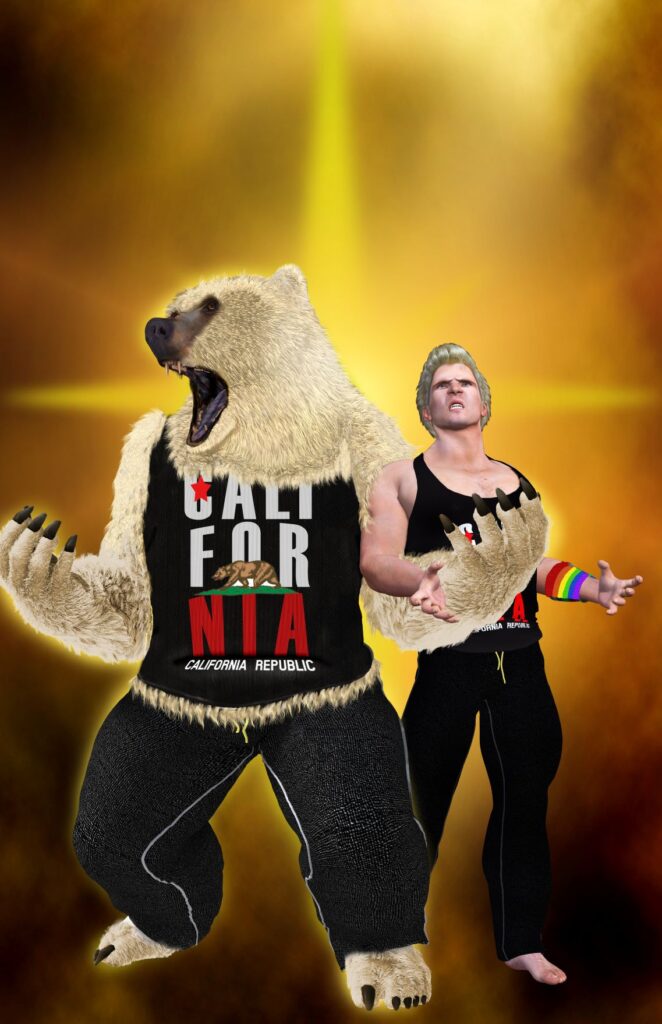 As the name implies, Marcus has the ability to transform himself into a huge, golden-hued bear, with all the strength that a bear would have.

Born and raised in Sacramento, Marcus discovered his abilities during a weekend camping trip to Lake Tahoe with his family at age 12. His parents witnessed his initial transformation, which was apparently triggered by fear when a black bear entered the family’s camp site. The black bear evidently witnessed it, too, and quickly retreated.

The Jones family was very supportive of their son and made sure he never became ashamed of his meta heritage. Marcus chose to remain in Sacramento rather than relocate to a larger city, where he is highly regarded by the populace and authorities alike.

Marcus is a very amiable person, known for his generosity, his kindness, and his terrible jokes. He is an openly gay metahuman, a vocal advocate for LGBT rights, and volunteers on weekends at the Sacramento Gender Health Center.

Someone wrenched my arms behind me and yanked me away from the others. I could see two thugs doing the same to Dana. A quick count revealed eight males: one holding me, two holding Dana, and five in a semi-circle around Marcus, two with guns drawn, two with knives, and one holding a length of steel pipe. I didn’t realize steel pipes were still in fashion.

Marcus was looking directly at me, clearly afraid for my safety.

Sweet of him. But I wear heels for a reason.

A crushing, energy-enhanced stomp on my captor’s foot set me free, and a power punch to his face stopped his yowling. I only had to hear the crunch to know that he’d be no more threat. A glance at Dana shocked me, as I saw both of his attackers sailing telekinetically through the air to slam into the brick wall of the market next to the taqueria.

The others turned at the commotion, and then everything seemed to slow down. I looked up, and all I could see was the gun aimed at my face. My heart hammered and fear paralyzed me, so certain was I that my brains were about to decorate the street behind me.

Two gunshots, almost simultaneous. They weren’t as loud as in the movies, but the blast of air in my ear as the bullet ripped past was loud enough to scare me out of my deer-in-the-headlights freeze.

Time returned to normal just as I heard the growl.

The gunmen and I looked to Marcus, the source of the growl, who was now suffused in a golden glow, his body transformed to a massive creature. I nearly felt sorry for the remaining thugs.

Now I knew why he’d looked familiar to me. And why he was wearing stretchy clothes. Marcus Aurelius Jones, a.k.a. The Golden Bear. Sacramento’s resident meta, and one of the only ones I knew of in California who had a public identity. I could barely contain my excitement!

I won’t describe what happened next, other than to say it was over very, very quickly. And then, the big bear began to laugh.

Show me a hero and I will write you a tragedy.~F. Scott FitzgeraldTweet