Among the many questions I receive from the public has to do with my costume, so I thought I’d address a few of them for you, taken from recent emails.

How many costumes do you have? Seems like a lot.

Well, in my head, the number is three, but in reality, it’s technically higher. There was my first outfit, when I was just starting out. Everything bought off the rack, some of it in thrift stores. Lots of leather. Pants, vest, boots, head covering, wrist-bands, even a choker. And sunglasses, too, which tended to vary in style every time a pair got broken. My brother said I looked like a cross between a biker and a hooker. I rather agreed, honestly, especially since it was in this outfit that my arms and midriff were bare. (Never felt comfortable with that, if you must know.) 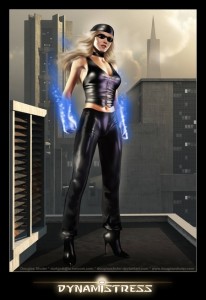 For the record, I never looked this good.

My second costume is the one most people are familiar with, and the one I wear the most. It’s the blue and white, skin-tight version with the mask, gloves, and cape. And this is where the multiple numbers come in, with the design and decoration of the thing. The white patterns on the body and cape changed over the years, eventually becoming the DNA pattern you see today. But even that changed. As you can see in the fan art, the DNA pattern on the body came up to my hips at one point, then farther up the ribs, and ultimately came the whole way up to wrap around the shoulders, as it remains today. Get ready for the haymaker.

And the third also has evolved. It started as depicted below, but then the bottoms became blue cargo pants, the top now covers all flesh, the belt is now like a police utility belt. Still has the boots (actual utilitarian boots, not fashion boots, as on the other two), my team logo on the chest, blue headwrap, sunglasses, and black leather trenchcoat over all. Despite my white hair and energy blasts, most people don’t know me in this outfit. I have no recollection of this photo being taken.

Do you wear your costume under your street clothes, like many metas do?

Nope. Most metas maintain secret identities. I don’t. So if I’m in my civvies and have need to do something Dynamistress-y, I just do it. I have no need for the quick change. In fact, suiting up can be a laborious process!

How do your gloves and boots not get destroyed when you blast and fly?

It’s called “energy-transparent textiles.” Don’t ask me how it works, as this is far outside my realm of science, but as I understand it, a special process makes the material able to allow energy to pass through it largely unimpeded. So my bio-plasma blasts work through gloves.

Now, before you start thinking this is the coolest invention since the Flowbee, let me remind you that heat is a type of energy. So such gloves and boots do absolutely nothing to keep a person warm, which is kind of the opposite of what most people want gloves and boots for. Fortunately for me, I’m always warm, but others aren’t so lucky.

Okay, that’s it for Dyna Q&A this week. Feel free to email me any questions for future installments!

We all lose friends... we lose them in death, to distance and over time. But even though they may be lost, hope is not. The key is to keep them in your heart, and when the time is right, you can pick up the friendship right where you left off. Even the lost find their way home when you leave the light on.~Amy Marie WalzTweet