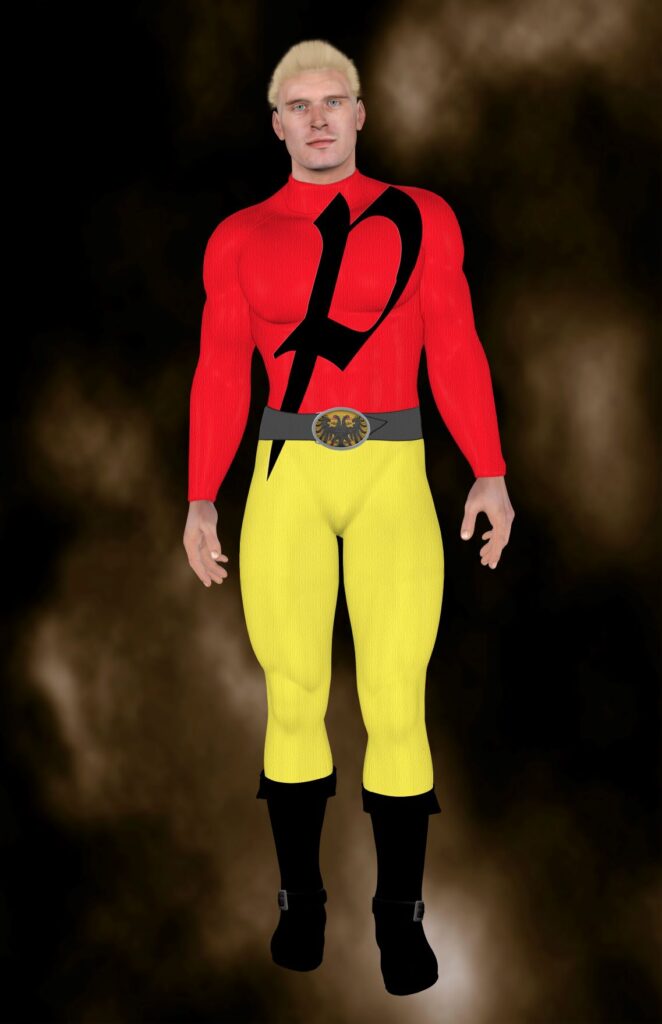 Powerhaus was a German immigrant to the U.S. who established himself quickly in San Jose as a reliable protector of the people. Powerhaus was one of the metas believed to have turned to the other side of the law, but it was later discovered that he was one of those replaced in the Nevada Incident, as it is known. When his counterpart was returned to his own world, Powerhaus did not return. It is assumed he died in that other world.

Powerhaus was an amiable, if somewhat gruff, individual. He was a friend to many and was especially kind to children and animals.

Powerhaus was waiting for Billy’s flames to weaken. And even though I felt my own strength returning, I was in no shape to fight off anyone. “Let him go,” I said, nodding over at Billy.

Valora glanced over her shoulder, then back at me. “No.”

“I’m fine with giving you my notes, because I know you’ll never be able to do anything with them. But you’ve got to let him go.”

She shook her head. “Again, no. I don’t need your agreement. I just need you alive. Plenty of telepaths out there who’ll extract every bit of information I need from your pretty little head.” Valora reached up and removed her winged helmet. Then she spun and hurled it with incredible force across the room. I watched as it disappeared into Billy’s wall of fire. A moment later, the flames vanished. Billy was slumped on the ground, the helmet stuck into his shoulder by one of its golden wings. Laughing, Powerhaus moved in for the kill.

Adrenaline surged in me and I felt my energy increasing. I probably bellowed something stupid, like, “Get away from him.” I’m not sure. But before I could even rationalize what I was doing, I was blasting across the room, holding the spear in both hands like an axle. Powerhaus turned in time to see me, but not in time to duck. I caught him in the forehead. He went down, stunned. I landed next to him, trying to ignore the spatter of my blood as I did so. One energy punch to the head and he was out.

Ever has it been that love knows not its own depth until the hour of separation.~Kahlil GibranTweet