Last weekend, my brother invited me up to Sacramento for a little fun. In this case, it was taking a short train ride out of Old Sacramento. Each October, they feature the “Spookmotive” train, in honor of every kid’s second-favorite holiday. They’ll have different themes each weekend, and last weekend, the theme was “superheroes & villains.” Before the train departed, I got to pose with a lot of awesome kids, and got to meet and talk with them on the train itself. 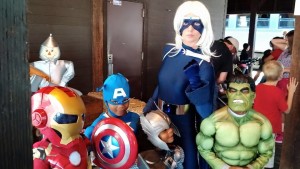 More photos are posted over on my Facebook page, by the way.

Now, this was great fun, similar to appearing at a convention. I love kids, and get a great kick out of meeting them and taking pictures with them. But I can’t help but find it a bit ironic. Because when kids go to conventions and whatnot, their parents are often talked into buying them all sorts of products pertaining to the costumed folks. Often, this is in the form of colorful accounts of their exploits (whether real or imagined).

But the thing is, these accounts are overly sanitized. They’re superficial and never really capture what it’s like to be out there, doing what we do, nor do they reflect what effect these exploits have on us. Which brings me to my own accounts.

In case anyone was curious, no… these books are not for kids. And it’s not because of the occasional f-bomb, descriptions of gruesome injuries, or the mention of sexual activity.

No, the real reason these books aren’t for kids is because they show “heroes” (primarily, me) in an honest light, blemishes and all. Hell, forget the blemishes. My profound character defects are what cause me to put that h-word in quotation marks. Don’t believe me? Read the books.

Just keep them from the kids. They don’t need to know that their heroes are just people, flawed like everyone else. Let them keep their illusions for a few more years.

Everybody has a world, and that world is completely hidden until we begin to inquire. As soon as we do, that entire world opens to us and yields itself. And you see how full and complex it is.~David GutersonTweet