Warning: session_start() expects parameter 1 to be array, string given in /webroot/v/i/vincen/dynamistress/www/wp-includes/class-wp-hook.php on line 286
 Because You Asked: My Scariest Moment Ever – Dyna's Place ↓

I received an email recently that asked me about the scariest moment I ever had in my activities as Dynamistress. While there have been many moments of terror over the years, there’s only one instance I can point to as the scariest. It was the first time I thought to myself, “I’m gonna die. Right here, right now.”

This was very early in my career. Back in the days of the “biker or hooker” outfit. It was before I’d discovered the ability to be (somewhat) bulletproof. And that moment was when I was looking at this: 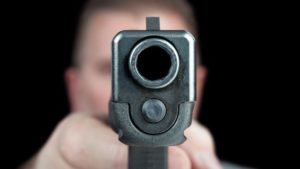 It wasn’t quite that close, but it was a gun pointed directly at my head. And it was the most pants-shitting scared I’ve ever been.

And yes, he squeezed the trigger.

The bullet whizzed past my ear. I’ll never forget that sound. The only comparison I can make is that it was like a bee buzzed directly past my eardrum. Kinda like that. A little.

I’d like to say that I took him out before he could fire again, but credit for that goes to this guy. Seems it’s pretty distracting when you see a guy transform into a bear.

It wasn’t long after that, however, that I was shot point blank in the chest and survived, as my body basically said, “Nope. No entry here.” I wonder, sometimes, if that bullet had struck my forehead… would I have survived?

I’m okay with never knowing the answer to that.

Whenever technical progress opened a new window into the surrounding world, I felt the urge to look through this window, hoping to see something unexpected.~Bruno RossiTweet